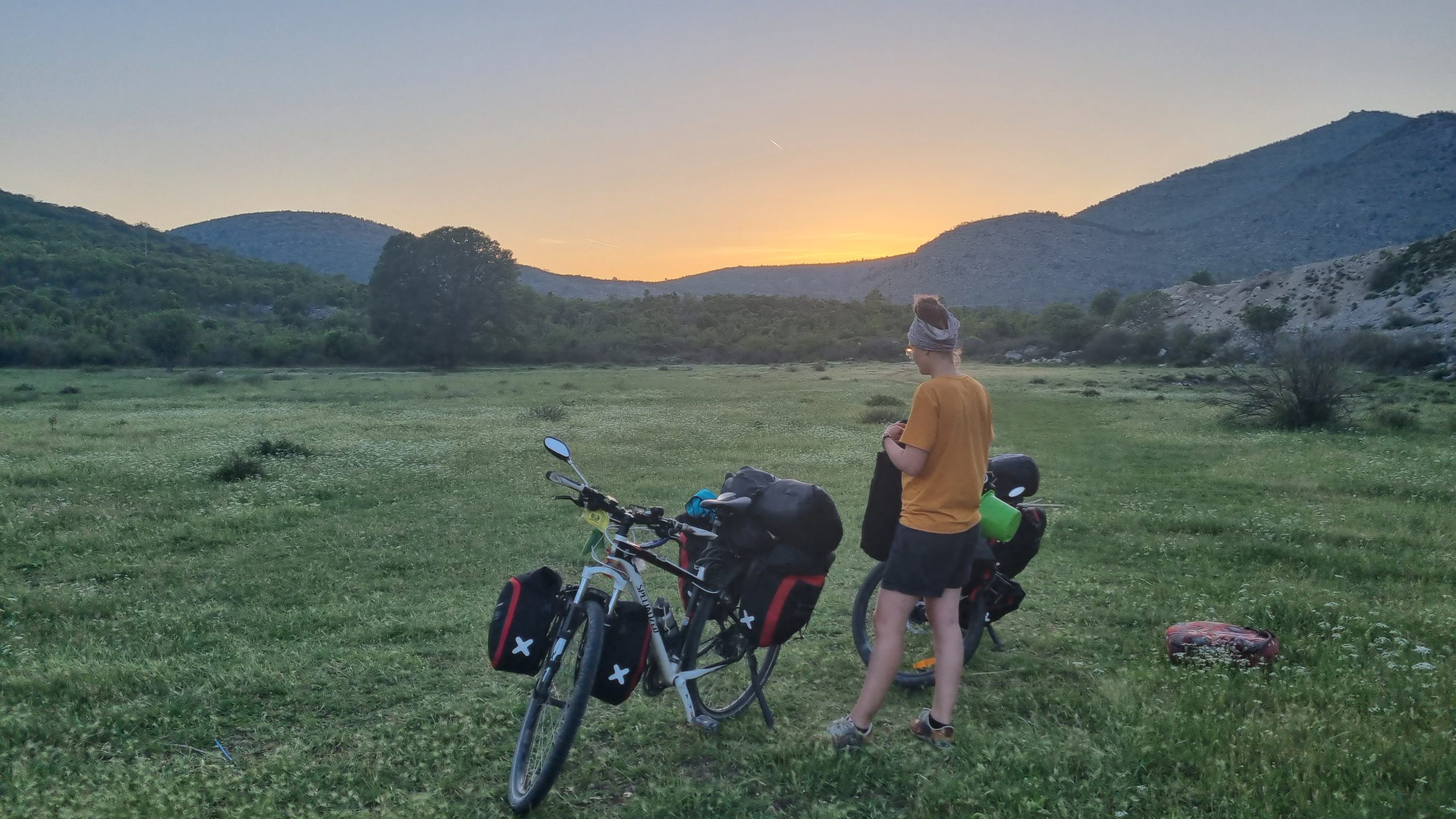 [TRAVEL BOOK #6] – The Ćiro Trail, from Mostar to Ivanica, Bosnia and Herzegovina by bicycle

Here we are discovering Bosnia-Herzegovina by bicycle!

A Balkan country with many contrasts and a balance that still seems fragile, populated by Bosnians (Muslims), Serbs and Croats. You don’t know what language to say “hello” in, but you immediately feel good here! A real bubble of air after the tumult of the Croatian coast between Split and Ploče. A big change of atmosphere!

With no water, no food, no Bosnian pass and no local currency, the change of scenery starts at the border.

Ćiro Trail. From Mostar to Ivanica.

We cycled on the “Ćiro Trail” a cycle route that follows the footprints of the old railway line in service from 1906 to 1976, built under the Austro-Hungarian Empire. It connected Vienna to Dubrovnik, pretty cool! It was destroyed by the communists at the time of Yugoslavia, much to the regret of the inhabitants who praised the convenience of the train to reach the beach and to take it easy!

We pass through villages and railway stations destroyed by the war in the middle of green countryside and breathtaking landscapes.

Signs indicate the presence of mines. This is good to know, especially when you plan to camp: Bosnia is far from having finished this colossal demining project (there are still more than 150,000 anti-personnel mines dating from the conflict in ex-Yugoslavia in the 90s). An application (BH mines suspected areas) exists to identify known risk areas, but it was preferred to stay on the way.

Especially since we never managed to finish the ” Deminer ” game! Besides, the vegetation has taken over so much that it’s not easy to sneak into the woods. The snakes (and Balkan orvets) -which, this time, are not crushed by the many passing cars- are also relatively dissuasive!

Blagaj. A peaceful village about 10 km from Mostar, at the source of the Buna River.

Free of luggage, we decide to make a loop to discover the house of the Dervishes – a “Tekke”, building where Sufi brotherhoods meet (one of our duvet books being “Sufi, my love” we find the moment well chosen).
In the distance we see stalls and smoke, it seems to be market day: perfect, we’ll be able to discover the local cuisine – ćevapi (meat roll served with bread and raw vegetables), burek and other delights, between Ottoman and Balkan influences!

At the crossing with what seems to be the main (and very very busy) road of the market, we end up asking our way to a policeman (not to climb unnecessarily, of course!). He confirms that the “Dervish House” is on the right. It’s flat but we have to enter an unstoppable human flow for several kilometres. We joke a little while saying to ourselves that “we are really going to be a lot of people at the Dervish House”, “did they make an appointment or what?”… before understanding that ALL of them are going there!

We are actually in the middle of the Dervish mevlud festivities – the largest ceremony in all of Bosnia and Herzegovina, which brings together dozens of thousands of Muslims every year! Amazing to be here at this time!

It is hot, there are people sitting on the ground in every available millimetre of shade, families are even picnicking in the cemetery. The women look charismatic and strong, with hard faces and husky voices. Some are wearing headscarves, others not, but together they confidently smoke cigarette after cigarette. In any case, we feel quite encumbered with our bikes in this crowd! After 2 good hours (and a little struggle to find a corner where to leave our bikes), we manage to get to the famous house of the dervishes. Hundreds of believers are gathered for collective prayers. They chant and prostrate themselves in rhythm. We stay for a while, a bit behind, to soak up this energy without altering it, before leaving.

Mostar. We take a parallel street to avoid another crowd in Blagaj! We pedal at high speed thinking that we were clever on this one! Except that we quickly find ourselves blocked by a gathering of tuning cars. What we thought was our shortcut has, for the occasion, been transformed into a racetrack to make the good cars compete and blaze. Anai tried to ask the security guard if we could go through the track with the bicycles, but was refused! A dream that collapses 🙁 Mandatory turnaround !

We finally arrive in Mostar – known for its old bridge – by the main road!

Hutovo. Bivouac in the middle of nowhere, on the edge of a lake in front of a full moon!

Oops, wake up at 7am! We hear bells going straight towards us. Then the grass is ripped up around the tent. GG finally pokes his head out of the tent to see what’s going on: a herd of about 100 sheep and goats are grazing around us, accompanied by their shepherd. Our presence doesn’t seem to be a problem, and so much the better! We greet each other with a smile and drink our coffee in the middle of the sheep.

Ravno. We take a short break in the old railway station, which has been restored and transformed into a rather chic restaurant. The waiter welcomes us with great sympathy and shares with modesty the history of this place. We were even able to visit the unsuspected cellar of the station – better than an air-conditioned room!

A few kilometres further on, the village of Zavala. A second refurbished station facing a breathtaking view. Last water/food point before the border at 40km.

Today, we are tired, so we stop again. We meet Pauline and Julien, 2 French cyclists who travel through Europe! We share our impressions on the road and according to them the bivouac is not obvious on the next 30 km: it falls well, we did not want to advance more today! Driven by our tiredness (laziness?), we ask the waiter for advice. Bingo! He indicates us the ideal spot at 50 meters. People are particularly welcoming and kind, things are simple and it feels good!

After these few days in Bosnia, we continue our joyful journey towards Montenegro!