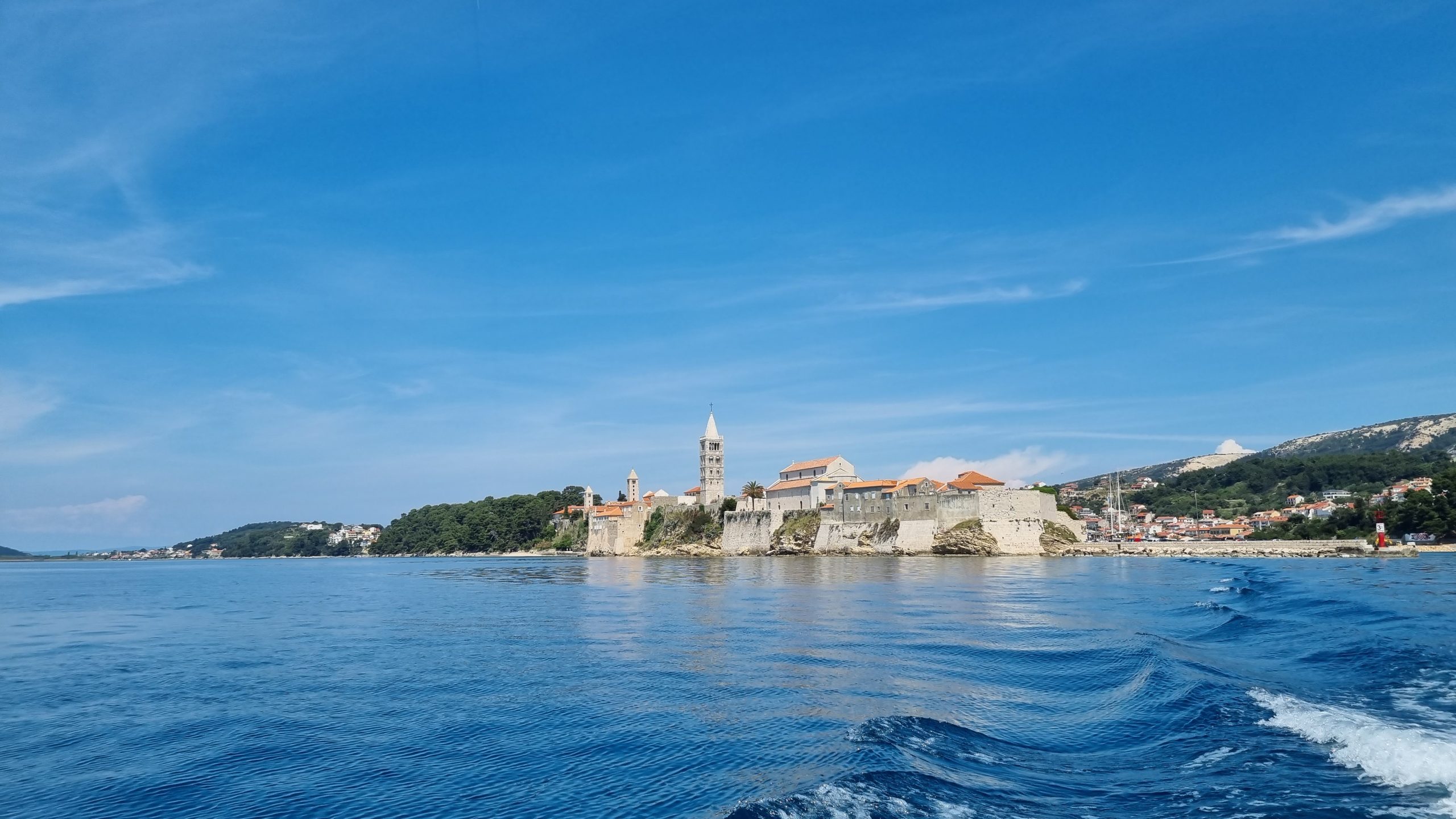 [TRAVEL BOOK #5] – From Istria to Dalmatia, Croatia by bicycle

Croatia by bike, following (almost) in the footsteps of Eurovelo 8 and passing through the islands of Cres, Krk, Rab and Pag.

After a short stay in Slovenia, we set off to meet Croatia and its islands. Croatia, it goes up and down. So much so that we start to see -with curiosity- muscles appearing on our thighs and calves (and they will surely be very useful for the rest of the trip!) We decided to go through the islands and we can say that we don’t regret our choice, the landscapes were amazing! (And as a bonus, the traffic was relatively calm).

We let you discover some anecdotes of the trip and go to this page to see more pictures of Croatia!

The border. After our obligatory break at Toni’s and her Raki, we are back in great shape, determined to cross the border, which is giving us the eye, towards Istria. Let’s go! The border is only a few hundred meters away: easy. Easy just before the passage of a mini “pass” at about 130 meters. We thought we were in good shape, but we soon realised that we were still in trouble. We hoisted our heavy bodies and loaded bikes painfully to the top before grounding again after this 13km climb.

Island of Cres. We arrive in the small village of Porozina. In the distance, on the boat, we could see how hilly and rocky this island is. We finally join Tom and Boss who are travelling on the Steeve Express (a splendid motorised castle)! It’s so heartwarming to meet up with the friends we met in Dharamshala 💙
We could stay for years in this little corner of preserved nature, even without drinking water. So it’s only after we’ve made a date with India by the end of the year that it’s time to get back on the road. We’re all pumped up to tackle the island’s hills! With one detail in mind: we didn’t anticipate the absence of civilisation over the next 26 km of climbing. And of course, it’s around 12pm that we “take off”, in the middle of the heat and with our water bottles almost empty: a good time; we had one of our best picnics on the car park of the first refreshment station/supermarket in Crès!

With our stomachs finally full, we leave the supermarket in the direction of Cres. Suddenly, GG’s bike brakes. Panic! The rear wheel is completely blocked. GG really wonders what’s going on before understanding that it’s Anai’s jacket that got stuck in the wheel and the brake pads. The art of creating breakdowns.

Rab Island. We arrive at Rab at sunset. We pedal under the beautiful end-of-day light with hairless mounts that remind us of Ladakh!

In low season, the only boat to reach the land via Rab Island is scheduled for Wednesdays at 12 noon. Perfect! We arrive early in the morning, to take the time to fill the bags and the water bottles for lunch (we will not be fallen for twice!). At the quay, we recognize the bikes of a German couple we met a few days ago (at the famous supermarket). There are also Tim and Alain, two Anglo and two Dutch couples. While waiting for the departure, we share a friendly moment of exchange of our respective trips. In the background we feel a little tension: nobody wants to stay on the quay and the boat is really small. On the paper, only 6 bikes are allowed on board, and we are already 8 bikes and 13 people! Everyone is watching from the corner of their eyes the arrival of the captain to take his ticket (the next boat is in 3 days). In the end, the captain disembarks serenely and smiling: he doesn’t care about all these considerations, and starts stacking all the bicycles (and the thirty or so panniers) carefully. Clearly, there could have been even more of us! The simplicity is heart-warming!

Zadar. Tonight we are staying with Lana in Zadar. She lives alone with her two young children Arian and Alissa, her husband is a political prisoner. We spend an evening at the rhythm of the children under the sign of lightness. Anai spends a long time playing with Arian in a fridge box: the possibilities are endless! Before going to bed, Arian generously offers us to spend the night in his cardboard kuća (pronounced “koutcha” – house). We take advantage of this passage in town to consult a dentist for GG and his abscess which has been lingering for several days. Croatians are very efficient: we easily find an appointment the day before for the next day, on a Saturday morning! It is the occasion to test the services of our travel insurance #chapka! (We discover then in this clinic a whole surgical, aesthetic and dental tourism very coveted where people seem to arrive from Italy, with their suitcases, for a cleaning!)

Trogir. After a generous night in the middle of the olive trees, we hardly restrain ourselves from calling the Guinness World Record when we arrive at the end of the day on the island facing Trogir: 89 km ! Maybe we can’t wait to leave the tourist coast? Maybe we also felt an imaginary pressure on our ego when other people told us about their average mileage! We rode so well today that GG even had time to lose his tooth and find a dentist to replace it! Dentists in Croatia, we love you!

Coastal villages. We passed through many seaside villages with rather recent tourist facilities. We are not sure if it is the ravages of the covid or simply that the season has not yet started, but many establishments are deserted. Others are under construction, to welcome even more people (but when?). We had the feeling to walk through ghost towns without really feeling the soul of the country. We did meet a few tourists, mainly Germans. The locals tend to answer us “Guten Tag” when we confidently say “Dober dan”. It’s quite disorienting. It’s a pity that GG doesn’t remember anything from his 10 years of German lessons, and that Anai only knows insults!

Omis. We discovered Omis, in Dalmatia. A former pirate stronghold, it is surrounded by the sea on one side, the cliffs and the Cetina river on the other: the setting is just beautiful!

We then decide to take the Eurovelo 8 despite the “strong” differences in altitude, to escape from the coast. After several kilometres and with the gap growing, Anai can no longer see GG in her rear view mirror. That’s when she decides to surprise GG by buying a cold drink in a grocery shop on the road. GG is supposed to drive by. Unluckily, she looks far towards the horizon and did not see the bicycle at the stop. Anai emerges victorious and returns to the previous intersection, hoping to see GG there. After a while she starts to wonder: is GG still behind, in front, on the right, on the left? On which road? Anai tries to call GG (who has the GPS). No signal. After several attempts, the phone finally gets a signal. GG shares his position, but the weak signal makes it impossible to know whether it is the road to the right or the one “a little further” to the right. In any case, the two hills are steep and we don’t want to miss out! We call each other to try to give each other some geographical indications. “Hello, hello. Megan’s grey station wagon with a Hajduk pennant. Do you see her?” “Bingo, it’s over there!” The drinks aren’t so cold anymore, but we’re glad to be in the middle of this forest! (Even if GG didn’t suspect anything about this!)

Split. Today, we cycle on the charming national road 8 which runs along the sea: a road with a lot of traffic and where Croatian driving is not relaxing – to say the least! On the horizon, the city of Split takes shape: a line of industries and blocks of flats. We take care to avoid the city and we cut across it to escape from this mess. We end up (unexpectedly) on the archaeological site of the ancient Roman city of Salone (with a nice industrial area background!)

We continue our journey on dirt roads that even require us to carry the bicycles on a short part. The weather is heavy, the storm is approaching. To escape the rain that has finally caught up with us, we take shelter in the metal-covered car park of a sorting centre, which is perfect.

Hajduk Split. Even if we wanted to, we could not ignore the existence of Hajduk Split (one of the biggest football clubs in Croatia). From the moment we entered Croatia until several kilometres into the neighbouring countries. Everywhere: roads, bus stops, facades, walls, pavements, electricity meters, bars…! Everything that can be painted is covered with the “blazon”. In each car, a pennant is placed on the central rear-view mirror. Hajduk Split is a real religion!

Ploče. The traffic is manageable today on the coast. We eat at a bus stop in the middle of nowhere (actually, not so much, it’s still the coast!), not sexy but luxuriously shaded! We are knocked out, it’s been several days that we pull on our new muscles to go full speed ahead towards Bosnia. Tonight we sleep towards Ploče. Apparently, on the point, there is a kite surfing school where camping is tolerated. We meet a local cyclist, who strongly warns us about the road: obviously, we are not the only ones to find the local driving intense! One arrives on the point, the heavy wind in the face! (It’s true that for a kite surfing spot, it makes sense, now that we think about it!) We find an old abandoned campsite with literally ransacked sanitary facilities, next to a house in the same state. In the corner of each room, human poop and cat food boxes. A nice mix. In spite of a very nice cardboard box fitted out as a sofa for a feline, we think we can find better places to sleep. A small chapel finally offered us a much better spot sheltered from the wind (after a little cleaning of papers, cigarettes, condoms, bottles, clothes, wipes… necessary). Humans are dirty!

Just before the border. We stop in the café with a view on the border post (this is becoming a tradition) and GG starts reading the newspaper (in Croatian). After a few minutes she finally comes across an article – with a photo of several tents – that seems to concern us: “ilegalni kamperi”. When asked, she decides to translate what seems to be “We are only in May, and the bivouacs have already started despite the bans and fines”. Oops! That’s good, we’re leaving the coast and Croatia.

PrevCham, the Tibetan holy and masked dances
[TRAVEL BOOK #6] – The Ćiro Trail, from Mostar to Ivanica, Bosnia and Herzegovina by bicycleNext
Grin Shopping-bag