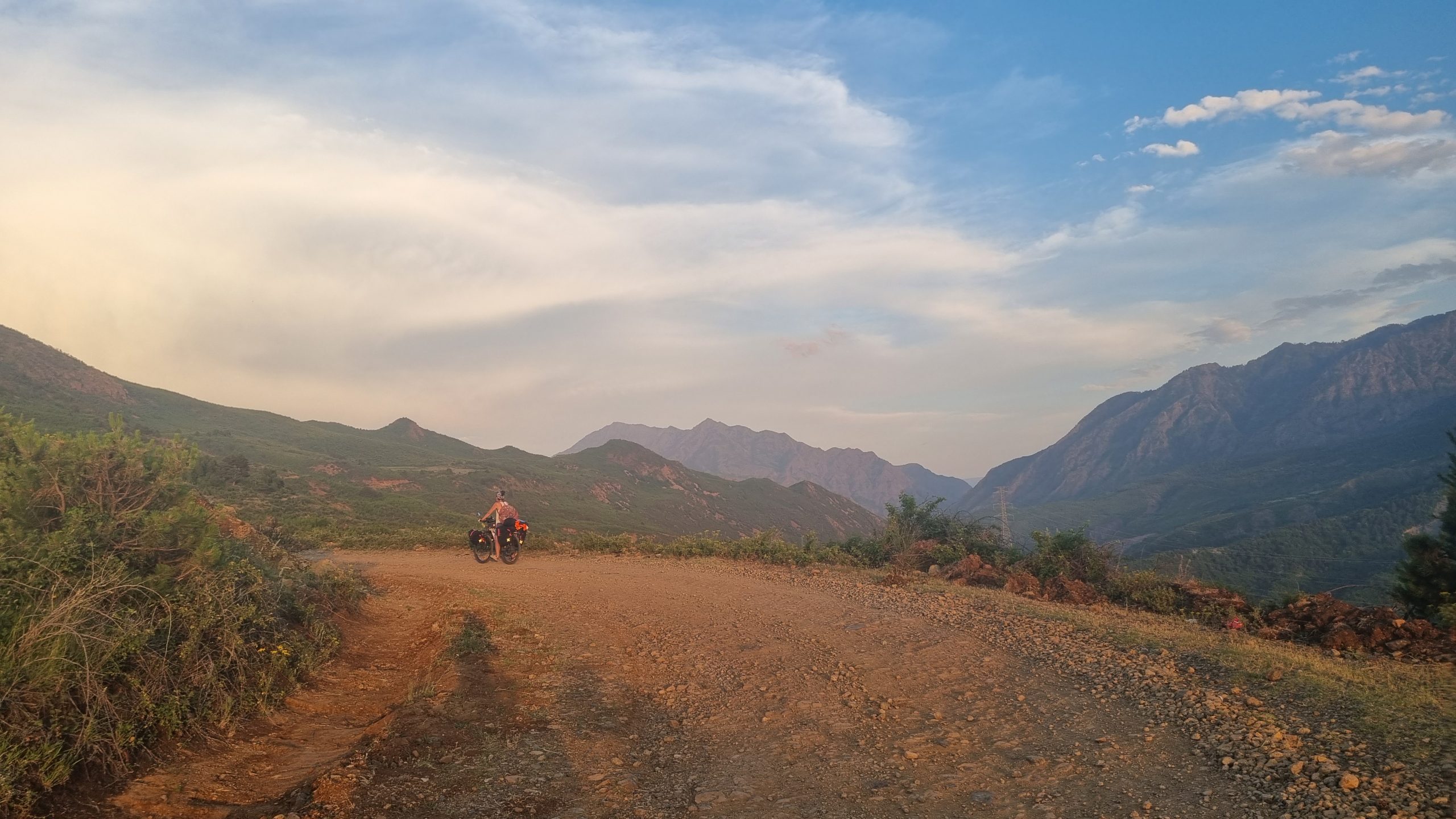 [TRAVEL BOOK #8] – Albania by bicycle, a mountainous country with a warm welcome

At the border post, the Albanian customs officers are so welcoming that they offered us to stay in their lodge! We hesitated, but with hindsight, it was definitely a good idea to continue!

Albania is a nice little mess. The country of the off-road Mercedes, of the huge and energetic “hand waving” when we pass, of the bunkers and the people with smiles up to their ears.

The smells, the currency, the language, the culture, the faces and the architecture change: certainly the biggest (and most beautiful) change of scenery since the beginning of this trip!

Shkodër. Our first pedal movements in a traffic that goes in all directions but it is fluid, we let go and we feel good. Here, no one is offended by seeing a two-wheeler going the wrong way, a car parked in the middle of the road or a scooter going the wrong way on a roundabout! Horns and zig-zags, it’s always ok! We pedal at the rhythm of this traffic to discover Shkodër, all our senses are on the alert to catch the little jewels of this new country. Our first impression: we will like it here! We feel like we are already in India, and it’s not to our displeasure! We smile wryly. Dogs roam the streets in teams, but they don’t really care about our presence.

Between Shkodër and Tirana, the plain is dotted with villages and crops as far as the eye can see. Vines, fruit trees (cherries, apricots, peaches, pomegranates…), cereals: you can find everything! Horse-drawn carts from another century pass us at full speed!

Tirana. Visit of the capital: a curious mix between modernity and soviet architecture!

A great place to learn more about the fascinating and intriguing history of Albania, the country that is a continuation of the Balkans but not really part of it (with Eri and her @tiranawalktour). This small country has completely isolated itself from the rest of Europe and is considered one of the worst communist dictatorships in history! Albanians discovered bananas and Coca-Cola only in 1991! The dictator Enver Hoxha -maybe a bit paranoid- had about 170 000 bunkers built to protect himself from an imaginary nuclear attack. Eri humorously explains that at that time, the United States and so many other countries had never actually heard of Albania: big disappointment!

One of our trousers is already out of breath from the trip, it must be said that it has a hard life! While passing in front of a small shop (about 2 square meters) of a tailor, we take the opportunity to entrust it and thus give it a second life! When we go through the door, the gentleman theatrically throws his newspaper over his shoulder and welcomes us with a shining smile! After a few mimes and gestures we manage to understand each other easily, he invites us to come back in an hour, the time for him to operate. He has worked miracles!

Elbasan. It’s starting to climb (in altitude and temperature). To change a little bit from the meetings with the cyclists, we met 2 very nice German bikers: let’s go to Australia! A trip so different from cycling, it was really interesting to compare our means of transportation! We thought that we had the same problems and that in the end it’s “the same stupid and crazy idea”!

Gramsh. Biofarm at 7 km! Cool, we heard we can pitch a tent and take a shower there! The worst and best idea of this trip. It’s 7pm, we take a steep, rocky mountain road that forces us to push the bikes. A little disconcerted by the road we ask a lady in her farm for confirmation, she indicates to us, with big turns with her arms “right, left; then right, then left then hop -hand going up- then left then right and to finish, hand going up perpendicularly: biofarm, yes”. It is at this exact moment that one should have suspected the trap. But no. We continue on our path, right …. Left… Barking dogs, left, left. Slowly, very slowly: it goes up. We pass a young man surprised to see us here with such heavy bicycles: “The biofarm? But it’s far, you’ll be there for two hours! In this kind of situation, you never know if you should trust this kind of remark! “5 km in 2 hours? Come on, you have to crawl! So we continue, pushing our bicycles with more and more difficulty, left, then right… under the light of the setting sun. At each turn we think we’ll see it, this famous biofarm; but no, a new mountain on the horizon, then another, and only vegetation as far as the eye can see. Just as we have seen the “hand up” part of the farm, we finally collapse on the side of the road, UNDER the sign that taunts us “Bio Farm on the left”. (with an incredible view of the mountains!) We have to pitch the tent and cook the semolina before it gets dark.

After a short night, we get up (for the first time) at 5 am to admire the sunrise. We quickly set off again before the heat, to reach this famous farm. We could have turned back, but we say to ourselves that we did not do all that for nothing, and especially that we are almost there. We push the bike on this damn rocky road again and again for at least 4 long kilometres through the mountain before FINALLY arriving in this farm (at 9:30 am)! We are greeted by babies of all species: rabbits, kittens, puppies, chicks… who happily cohabit. A strange place where we are the only humans with the employees and we can understand why! The kid was right, the road was still long! -They call it an “OFF-road camping”.

We thought it couldn’t get any worse, but at around 6am, we just elected the most dangerous path of the trip on the way down! Stuck in a narrow pebbled stream on a slope of more than 20%, we had to go down because it was impossible to turn around. Our 50kg bicycles have never been so heavy! One by one, we have to balance our bicycle to help each other in the sharp turns: a more than perilous exercise! Luck, miracle or agility: no damage to the bikes and no fall! That’s it, we see a road! Barely recovered from our emotions, on the now flat trail without too many rocks, we are greeted by big dogs that are not very polite. The main road is only 15 meters away. But to top it all off, the access is via a steep, smooth slope with a central gully over which water overflows and makes the path – of course – slippery (we won’t mention that a wild blackberry compote adds the missing cachet). GG, whose wheel got stuck in the pipe, goes aquaplaning, trying to hold back her faithful steed as well as herself. A slow-motion surfing stunt that ends (miraculously or muscularly) without too much trouble: the bicycle falls slowly to the ground and GG remains standing, brave. All this under the eye of the grunting dogs, who are now more numerous (each problem in its time). That’s when a lady comes to our rescue by vigorously shaking… a small stick: strangely rather effective!

It is in these mountains (and on the same day) that we beat our record for the highest positive elevation of our entire life: 1200m in 40 km (under a suffocating heat)! Even if it was particularly physical, the landscapes were well worth it!

(Too bad, that’s when the drone breaks down. Surely a sign to enjoy these moments with our eyes, and not behind a screen!)

Small pleasant surprise as a bonus: we discovered several spring water taps: a real blessing to refresh, hydrate and wash ourselves! The Albanians come there with the merco full of bottles to fill!

Here, even in the lost places where you think you’re alone, or that you think you’ll find a bit of shade: there’s always a shepherd, a donkey, a cow, a dog or children! It is amusing to note the unlikely contrast of the cowherd who watches over his two animals patiently for hours in the middle of a green landscape and then suddenly takes out his smartphone and starts scrolling. Or the brand new Mercedes 4×4 towing an old wooden trailer. Or the guy who gets dropped off by an old merco in front of his field, then sets off again on horseback!

After these climbs in the mountains, we finally find a small shop, it’s been a long time! We buy some food – one of the two men, Alban, speaks English! He warmly offers us some apricots for the road!

After the village, we hear again shepherds’ dogs in the distance, we decide not to stop: we have a head start. They pursue us for a while, before getting bored; this speeds up our arrival at the next stop.

Malik. First “big” city for a while, we take the opportunity to buy some food. At the exit of the shop 3 women seem to talk about us, probably intrigued by our equipment. The oldest of the three sits down with us and a mimed discussion begins, interspersed with laughter and big claps on the back, we may not have completely understood each other, but we had a good laugh!

Pogradec. Back to civilisation, we have passed more cars in ten minutes than in the last three days in the mountains, it feels very strange! Carriages come to accompany us at a reasonable and reassuring rhythm on the edges of the national road. We then put our bags down in a family campsite opposite the Ohrid lake, Camping ARBI Bar-Restaurant. We feel so good there (and we are so knocked out) that the night has turned into 3 days! We met Jean-Paul and Chantal, two experienced travellers on recumbent bicycles, a beautiful Alsatian encounter: we hope to see them again in France!

We still don’t know when or how, but Albania (and the Albanians) really made us want to come back! In fact, we had a real crush on this country from the very first days! We had the feeling that we were getting closer to India while we are still so far from Asia, India, Tuks-Tuks, Himalayas and momos!